Prader-Willi syndrome (PWS) is a neurodevelopmental disorder caused by loss of expression of paternal genes on chromosome 15q11-q12. The PWS locus encompasses multiple genes. The human necdin gene (NDN) is mapped to the PWS locus and not expressed in individuals with PWS. We will focus on the consequences of the loss of expression of the NDN gene for the development of the PWS features in order to understand the mechanisms involved in its pathogenesis and to explore novel therapeutic options.

PWS is a sporadic neurodevelopmental disorder caused by loss of expression of the genes in the PWS region on chromosome 15 with neurologic, cognitive, endocrine and behavioral disturbances. Figure 1 shows genetic map of the PWS region.

The imprinted genes involved in PWS on chromosome 15q11-q13 are under the control of an imprinting center (IC).

Genetic map of human chromosome 15q11-q13 (upper panel) and syntenic region on mouse chromosome 7B/C (lower panel). The PWS region on chromosome 15q-q13 that carries the imprinted genes is under the control of an imprinting center (IC). PWS is a neurodevelopmental disorder caused by loss of expression in the PWS region. The exact function of each of these genes in PWS phenotypes is still being elucidated.

PWS is a relatively common (prevalence 1/15000-1/30000) sporadic genetic disorder. Molecular classes of PWS and their frequencies are shown in Figure 2. 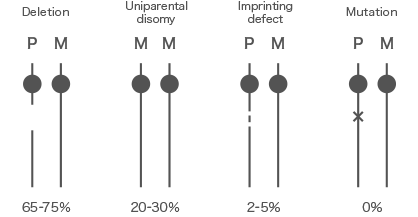 The parent of origin of each chromosome is indicated with M (maternal) or P (paternal). Maternal uniparental disomy can produce two chromosomes 15 from the mother and none from the father, resulting in no expression from the PWS region.

The parent of origin of each chromosome is indicated with M (maternal) or P (paternal).

The imptinting defects account for about 2-5% of cases and demonstrate a maternal-only DNA methylation pattern despite the presence of both the parent alleles.

Management is symptomatic and supportive.

We will focus on the consequences of the NDN gene loss of expression on the PWS features to understand the mechanisms involved in its pathogenesis.

A necdin-deficient mouse model shows a number of feature reminiscent of PWS such as a significant decrease in the number of oxytocin-expressing neurons and LHRH neurons in the hypothalamus, high tolerance to thermal pain due to augmented apoptosis in the sensory ganglia, increased skin scraping, and frequent apnea. Thus, necdin may be responsible for at least a subset of the multiple clinical manifestations of PWS.

We will analyze the structual and functional abnormalities during neural development epecially in the hypothalamus using NDN-null mutant mice to understand the pathogenic mechanisms of PWS.

Necdin is a member of the MAGE gene family. While only one MAGE gene (Nse3) exists in the genomes of plants, nematodes, insects and even non-mammalian vertebrates, mammalian cells carry 55 different MAGE genes.

We will analyze the expression and localization of only one MAGE, Nse3 and its binding partner Nse1 and Nse4 derived from the model organisms C. elegance and Dictyostelium in order to understand its basic functions.

We will design chemical compounds that interact with necdin or its related proteins based on 3D structual analysis in silico.

Compounds are screened in laboratory tests for their ability to affect the identified target in in vitro cell culture systems including iPS cells derived from PWS patients. Compounds are also testing in NDN-null mice to assess their efficacy.

So MasakiAsssistant Professor, College of Pharmaceutical Sciences, Department of Pharmacy

Rett syndrome (RTT) is a rare disease that is associated with mental retardation, epilepsy, autism, stereotyped movements of the hands. RTT affects 1 in 10,000~15,000 girls worldwide, and it is reported that an estimated 5,000 patients exist in Japan.
In this research, we aim to propose therapeutic options by clarifying the mechanism of the onset of Rett syndrome.

Elucidation of the mechanism underlying laminopathies and development of their therapies

The goals of our research are to elucidate the mechanism underlying two laminopathies and to develop new therapies for these diseases by cutting-edge methods of various research fields including proteomics, cell biology, in silico structural biology, and drug design.